Camille Dressler, chairperson of ESIN, lives on the small island of Eigg (30 km2, 80 residents). “I was living in France studying English, and my boyfriend’s mother found us this place on Eigg for a winter let so we came to spend the winter here to study, write and paint!”

The islanders took ownership of Eigg in 1997.  Looking back on her time as a director of the Isle of Eigg Heritage Trust, she said “Before the buyout we were just surviving. After the buyout, we could look ahead and build a solid future. Ten years later, we have put together the first renewable energy system that integrated sun, wind and water and our young people are coming back. This just shows what can be done if you give power to the community.”

Camille is devoted to community empowerment and community energy, as well as heritage and the arts. She is studying energy arts such as qi gong and dao yin yoga, also writing and making arty crafty things. A Gaelic learner, she has established a small croft museum modelled on the Spinster House she visited in the island of Huksara, on one of the ESIN inter island trips to Finland.  She has also created a bilingual crofting trail to go with it. Her first project was a shoe-string presentation of the island’s history, geology and wildlife in the the island’s former shop, involving the island children in creating the artwork as part of the Eigg Primary school Green flags. Having spent much time recording the older inhabitants of Eigg,  she became the island historian, writing the tale of her island: “Eigg. The Story of an island” published in 1998, from which I quote: …”a new sort of Gall has come to the land of the Gaidheal. I am one of them”… 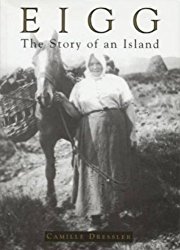 As a Director she helped build the organisation that owns and runs the Isle of Eigg, experiencing at first hand the benefits of working in a co-operative way. She has seen the role that creative thinking and learning as a group can have in improving community dynamics.

It can be done. We can do it. Camille and her fellow islanders proved it. On Saturday 21 January, they were marching in solidarity with the US women, the Eigg march being the second smallest in the world wide event!