Lesbos is a Greek island in the northern Aegean Sea, 1,630 square kilometres in size and thus the 27th largest island in Europe. Its 86,000 inhabitants are hosts to thousands of refugees who have fled Syria, Iraq, Afghanistan and other countries plagued by war and poverty. Hundreds have drowned or gone missing after trying to cross the Mediterranean to peripheral European land such as Lesbos. One of them was 1-year-old Safi Siyap, who drowned while the coast guard attempted to rescue her family. 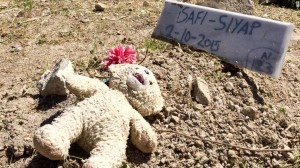 Saturday, Pope Francis visited the island. Children took pictures of him with their phones as he shook hands with those gathered to greet him. At the port, Francis offered a prayer to God for “all the men, women and children who have died after leaving their homelands in search of a better life. Though many of their graves bear no name, to you each one is known, loved and cherished.”

Despite international politics and the presence of the authorities, institutions, non-governmental organizations, the local people, simple people, citizens of Lesvos are showing a brotherhood, a humanity never seen before in these parts.