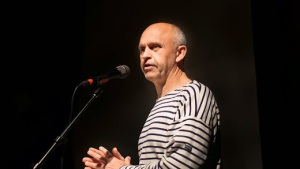 Anders Källgård is a doctor and a writer, Sweden’s foremost nesophile ie a lover of islands and an encyclopedical island portrayer, author of standard works on all of Sweden’s, Denmark’s and Greenland’s islands.

He has just published his eighth book on islands, called ”Nära Nauru” (Near Nauru). It is the sad story of the beautiful, tiny South Pacific island of Nauru, once was called Pleasant Island. In the early 20th century Germans and Englishmen found phosphate from bird droppings in abundance on the island. As there was a huge need for fertilizer around the world, the phosphate was exploited and made Nauru one of the richest nations in the world (it became independent in 1968). Money poured in. The islanders held the world record in obesity, diabetes and waste. Today, the phosphate is gone, the landscape destroyed and the money gone. Nauru is considered one of the world’s poorest nations, and the island is neither pleasant or beautiful. It has become one of the world’s least visited countries.
Anders Källgård decided to travel there anyway, saying: “We need distinct islands in order to understand how it can go. We need island laboratories in the 2000s as much as Darwin did in the 1800s and anthropologists and linguists in the 1900s . We need the island of Nauru as a warning.”

On his webpage http://www.insula.se/ he runs a complete register of Swedish islands and you can order ”Nära Nauru” which , sad to say, only exists in Swedish (so far).