Tidal Wave of the Century 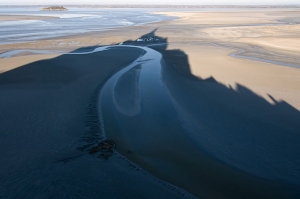 Tides result from the attraction of Moon and Sun on the seas and oceans. Tomorrow, on March 21, all astronomical factors are in perfect conjunction: alignment of the stars, the shortest distance on orbits, and will raise the the bay of Mont Saint Michel in Brittany over 14 meters – the height of a four-storey buidling.

The Mont Saint-Michel is the world’s second largest location after the Bay of Fundy in Canada, where the tidal range is the most important.

In France, the magnitude of the tide is indicated by the tidal coefficient: between 20 and 120. On March 21, it will reach 119.

“It’ll be awesome and spectacular. We will have a large mass of water going up before going down, “says Nicolas Weber, a specialist at the french Service Hydrologique et Océanique de la Marine (SHOM) in Brest, but calling for prudence.