Went for a walk to one of my favorite places

Went for a walk to one of my favorite places.
Rannagh Park, I never fail to feel good every time I go there.
Some spot that field, I remember picking stones of it 40 years ago, Hugh Nancy Rodgers child labour but it became a soccer field.
Why Soccer?! Probably because it was the game our fathers played. The good people from that side of the island signed it over to Arranmore Utd.
For nothing. Well maybe a glass of Whiskey
So I got thinking about the field and all who pulled on the Arranmore Jersey, at least 300 lads down the 31 year history and from all over the county and Country.
Never heard one negative comment from any mainland player. Ever.
We had many brilliant Days and some not so brilliant but on them occasions it was good for someone else. Fair enough.
We even win the GAA All Islands on Rannagh- a soccer field (not Many can say That). Then I thought of all the events that happened on the Field and will continue to happen on Rannagh, JBH. Memorials, camps, sports days, Coláiste Árainn Mhoir sports. It hosted 3 days of Concerts during the Aphort School Centenary, A Wedding (some Day that was) this year it Hosted Swell Festival, bringing Hundreds from all over the Country and other countries. Its soil went with a past player who sadly passed. Our fantastic pipe band got invited and played the National anthem at an international match because of The Rannagh, special day that was for the band and the island.
Thank you to the visionaries who built the field and a bigger thank you to those from Arranmore Utd who never refuse anyone to use it.
All they asked is to leave it as they find it.

Some Field that lads.

But there are other fields on Arranmore

Build it and they will come.

PS
70 yes 70 from the island go to Switzerland next weekend to represent Arranmore Utd and Donegal League
So next week’s walk will be in the Alps.
Some Craic that will be.

Jerry Early is a publican, musician, fisherman and community campaigner living on Arranmore Island, Co. Donegal, Ireland. He is a founder of IIMRO (Irish Islands Marine Resources Org) and works tirelessly for the benefit of his Island Community as well as Island fisherman up and down the coast of Ireland. 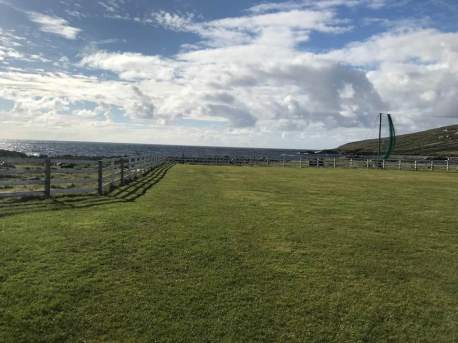