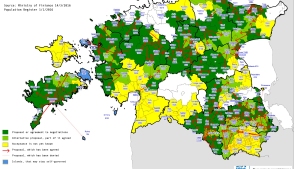 Estonia has an administrative reform in progress, where local municipalities with populations under 5,000 must merge. If they do it voluntary they get financial compensation, if not, government can inforce compulsory mergers. There are some exceptions, though: small pelagian islands with local authority (Ruhnu, Kihnu, Vormsi) can stay self-governing in spite of that their population is less than 5,000, if they wish and submit reasonable arguments for this to the government by the beginning of the next year. It seems they will.

– “Independence is a sweet word, but the questions is if these small municipalities have enough administrative capability,” says Elle Puurman from Wormsi, active member of the ESIN board.

The Ministry of Finance’s map of possible future mergers of local governments across the country paints a motley picture of a country full of parishes too small to remain independent under the stipulations of the new administrative reform. Those who go willingly in merging with neighbouring parishes will be rewarded handsomely for their cooperation; those who don’t will be forced to merge anyway come the new year.

According to the latest round of administrative reforms, the new government-mandated minimum population required for an independent administrative unit is 5,000, although the suggested minimum population is actually 11,000 residents per local government. Extra effort made in meeting the latter number will be rewarded as well — in addition to the 100€ per resident already to be paid out to merging parishes, any local governments formed by merger to newly surpass the 11,000-resident mark will be awarded an additional 500,000€ merger grant as well.

The grant, however, is only available until January 1, 2017, after which any remaining parishes not meeting minimum size requirements will be forced into merging regardless.

In certain situations, such as with parishes with much smaller neighbours, the new stipulation all but requires that the small parishes all merge with one another and possibly with their larger neighbour as well, as that is the only way to guarantee that all of the parishes involved would meet the 5,000-minimum requirement.

This is the case in Hiiumaa, for example, where the island’s largest parish, Hiiu parish, would only need the addition of one of its neighbouring parishes to surpass the 5,000 mark, but no two remaining parishes combined would be able to meet the requirement as well.

The parishes of Saaremaa are similarly planning to merge into one big parish, with the exception of the neighbouring island of Muhu, which, like Vormsi, can take advantage of an exception that will be made for small maritime islands that do not wish to merge local governments with any island or mainland neighbours.