Researchers Luca De Benedictis and Anna Maria Pinna from the University of Cagliari have launched the term ‘bad geography”. They have explored the geographical dimension of insularity, measuring its effect on trade costs. An interesting report with many different aspects on insularity http://www.siecon.org/online/wp-content/uploads/2015/10/De-Benedictis.pdf.

I quote: ”Insularity is not in general considered the worst condition in terms of ’bad geography’. According to both empirical and theoretical literature, the most immediate case of exterme geographical condition is the lack of direct access to the sea. This is considered to be a fundamental cause of heterogeneity among countries. One out of four countries in the world is landlocked; in Africa, it is one out of three. On the contrary, having direct access to the sea is the geographical condition that has been found to be the most advantageous for the economy of a country: coastal countries are wealthier and experience 30% more trade than landlocked countries But the direct access to the see can generate extreme geographical conditions. Islands are completely surrounded by sea. This full land discontinuity raises costs by eliminating alternatives in the connection system of an island and by raising the level of uncertainty for the remaining alternatives. The small and remote nature of island countries should be considered in view of these characteristics, revealing the crucial physical difference between islands and coastal countries. But also not all islands are made the same.”

Benedictis and Pinna conclude that to be an island is not bad per se in terms of trade costs. Bad geography can be reversed by connectedness and open institutions.

Easy said, hard to do. Let me quote Spilanis, Kizos and Petsioti “Accessibility of Peripheral Regions: Evidence from Aegean Islands”: On islands, where “everyday transportation is not available, many services are provided locally even if their quality or variety may not always satisfy local needs. Therefore, the increase of the availability of intermediate services locally in bigger mainland settlements is unsurprising, since the size of the population justifies the provision of private services (selling furniture, electric appliances, home products, physiotherapy services) and the existence of public services (tax office, town planning). Establishing and maintaining such services in areas where the level of population is lower than the threshold for its “spontaneous” emergence raises the cost for both private and public services. For public services, a revealing example is provided by ESPON (2011) for Notio Aigaio Region (40 inhabited islands). If all its population was living on one island, a maximum of three ports would be sufficient, while now there are 50, along with 14 airports instead of one, 21 power production plants instead of one, five hospitals instead of one, 90 primary schools instead of 211, 35 waste water treatment units instead of eight, and so on.“

If the Greek islands in the Aegean Sea (Notio Aigaio) could be grouped together, life would be so much simpler for everyone. Same thing were they municipalities in Germany. I believe they do suffer from ‘bad geography’. 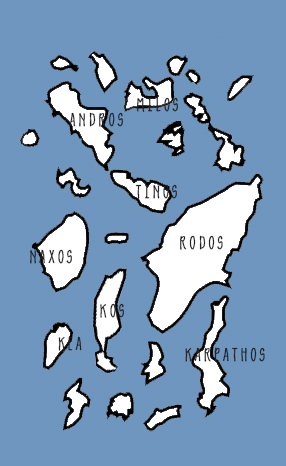 Some Aegean islands grouped together 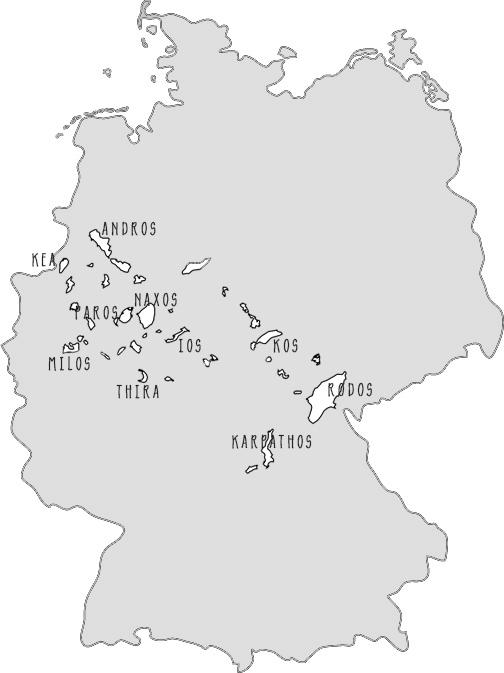 Some of the Aegean islands migrated to Germany (adapted from Jean-Didier Hache, CPMR)