Death of the Irish islands? 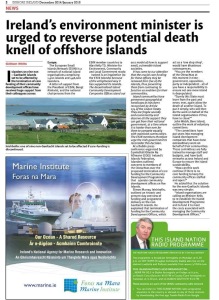 “The ESIN letter ended up in the press. Thanks for sending it, as it was a great help to keep our issue going”, says John Walsh.

04 December 2014
Dear Christian Pleijel
I wish to acknowledge receipt of your recent email which I will bring to the Minister’s attention.
Yours sincerely,

This letter in support of the Irish islands community offices was written and signed by eight ESIN members as decided on the Board meeting on November, 26, and sent to Irish Minister Alan Kelly today.

Sorry to say, we did not reach the Estonian Islands Association in time, but they are giving their full support to the letter and would have wanted to sign.

Communities on nine off–shore Islands are shocked at the news that the Irish Department of the Environment, Community and Local Government is to terminate funding to their five Community Development Companies Offices as and from December 31st, 2014.

This is a severe threat to the island societies of Inishbofin, Inishturk, Clare, Bere, Sherkin, Dursey, Whiddy, Long and Heir. Further details in the attached letter.

Death of the Islands?