The program was hosted by MEP Nikos Chrysogelos with the participation of DG MARE Maria Damanaki. It was divided into two parts: ”Island Transport Connectivity” and ”Green Transformation of the Shipbuilding Industry”. In the first part, ESIN was one of the speakers along with the TEN-T program, the Marco Polo programme and CPMR.

Jaroslaw Kotowski from the TEN-T spoke about the ”Motorways o the Sea” (MoS) and pointed out that these are logistic chains linking two member states’ freight and passenger transports. There are 7 MoS projects in the Mediterranean but only one working and 12 in Northern Europe.

Funding is 20-50% depending on how wide the benefits are and the regional dimesnion. Next call will be opening in November 2012 for the period 1-1-2012 – 31.12.2015. 2014-2015 the MoS will be the pillars of TEN-T, no maritime operators need to be included and the funding will be 30%. It will accept projects increasing accessibilty into peripheral and island regions (even if there is no link between states).

Simon Oscislowski presented the Marco Polo program which supports operating maritime services if they shift cargo from roads to sea, are common learning, catalyst actions and have innovative loading measures. When it comes to island connectivity and since there are no roads between the islands there is no rule of partnerships between countries.

– European Union policys are not adopted to the ultra-periferic regions

Finally, I gave a short introduction to ESIN – the voice of 448,000 residents on the 1.300 smallest islands of Europe. I then pointed out five aspects of insularity and transports with examples from Saaremaa (fixed link vs ferry), Samsö (Co2 emissions), les îles du Ponant (financing), Lipari (cost/revenue models) and Lipsi (double insularity). Finally, I concluded by proposing a joint learning project regarding cost/revenue models and an electric car system project.

The program then shifted to the Green Transformation of the Shipbuilding Industry which was very interesting but which I will not relate to here. 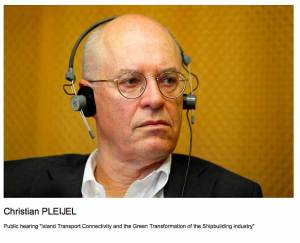